The historical and cultural heritage of the Great Basin National Heritage Area is one of its most unique features. The Nevada Northern Railway offers train rides in Ely, Nevada, or you can visit sites along the old Pony Express Trail.

*This area is a very remote region with limited services and spotty cell service. Please be knowledgeable and prepared prior to embarking on your adventure. 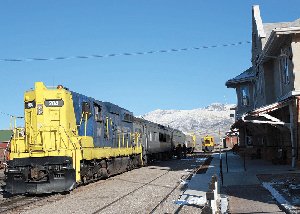 In 1902, large copper deposits were discovered near Ely, NV. Railroad owner, Mark Requa, saw this mining activity as an opportunity to expand his existing company, the Eureka & Palisade Railroad, into new territory. By 1905, construction on a new rail line began. In operation until 1983, the Nevada Northern Railway provided both passenger and cargo service. Today, you can take a step back in time when you visit the Nevada Northern Railway museum or ride one of their working trains. The newly named “Ghost Train of Old Ely” runs throughout the year, offering themed dinner rides and holiday specials. 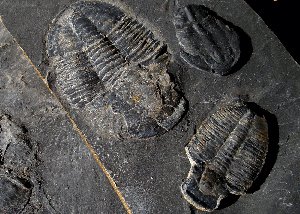 Trilobites are an extinct species of marine arthropod that lived approximately 521 million years ago. Trilobites flourished all over the world for roughly 300 million years, resulting a highly diverse fossil record that delights professional and amateur collectors alike. Antelope Springs, UT, is one of the best places in the world to find trilobites, with private and public quarries available for fossil hunting. The private quarries typically charge a fee but promise a high likelihood that you will find a fossil there. 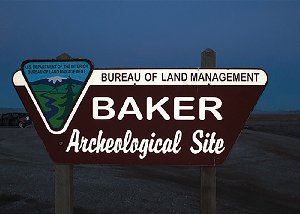 Baker Archeological site, also known as Baker Village, is the site of an ancient Fremont settlement that is about 800 years old. Inhabited for about 75 years, this site gives archeologists valuable insight into the life and customs of the Fremont people. The Fremont were a semi-nomadic people, often moving their homes from place to place. For this reason, many Fremont sites are not well preserved. The Baker Archeological site is remarkably well preserved, and the layout of the village can easily be seen. The site was backfilled after its excavation to protect to actual structures, but visitors to the area can see raised concrete where any foundations exist below. The site has a picnic area and vault toilets, open year-round. There are interpretive materials and a self-guided trail through the site. 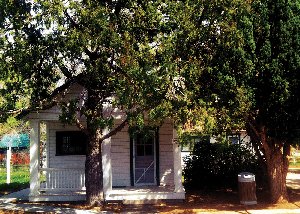 Great Basin Heritage Area office is located in the Historic Baker Ranger Station. Built in 1911, it was first known as the Baker Administrative Site. In 1918 it became the ranger station for the Baker Ranger District of Nevada National Forest. In 1986, Great Basin National Park was established, and the station served as an administrative building for the park. Today, it is the headquarters of the Great Basin Heritage Area. There are several other buildings in addition to the GBHA offices, and there are interpretive and informational signs posted outside. 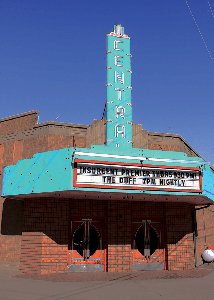 A historic theater with a small-town feel, the Central Theater in Ely, NV, is the perfect place to end a day of sightseeing. Built in 1943 in the Art Deco style, this theater will take you back in time. Although the setting is old-fashioned, the equipment and movies are new, and the snack bar serves popcorn, soda and alcoholic beverages. Check out their Facebook page for movie times and info.

Cove Fort is a historical site located in  Millard County off of Interstate 70. It was built in 1867 and is one of the few forts still standing due to its construction from volcanic rock instead of wood. 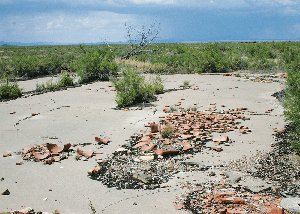 During World War II, 110,000 Japanese men, women, and children were placed in internment camps in what is widely considered one of the worst civil rights violations of the twentieth century. Today, we remember the mistakes of the past in the hopes that those mistakes will not be repeated. Topaz Internment Camp, just outside of Delta, UT, was open from September 1942 until October 1945 and during that time grew to be the fifth largest city in Utah. Today, the camp is almost completely gone. Although the buildings were not preserved, the remains of foundations, roads, and occasional artifacts can be seen at the historic site. Please do not remove any artifacts from the site. The Topaz Museum, located in the town of Delta, offers preserved collections of art, artifacts and photos from the camp. 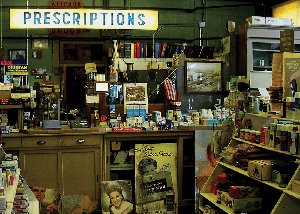 Step back to a simpler time as you visit the McGill Drugstore Museum. As you look around, you will see a working old-fashioned soda fountain, and products on the shelves like Dippity-Do hair gel for women. Built in 1908 by the Steptoe Drug Company to serve the miners of McGill, the drugstore was one of the few gathering places in the community that welcomed anyone, regardless of their social status. The store was in operation throughout most of the 1900s and closed permanently in the mid-1980s. It was donated to the White Pine Public Museum in 1995. Much of the early inventory and records have been maintained, allowing an unfiltered look into the past. Open for private tours on request. 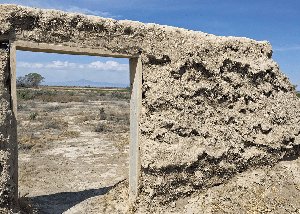 In 1865 Mormon settlers built Fort Deseret for protection during the Blackhawk Indian War. Unable to provide protection due to the Civil War, the US Government urged the settlers to relocate or build a fort; they chose to do the latter. The fort was constructed in 18 days by 98 men and is made of adobe mud and straw. In order to speed construction up, the men turned it into a competition. The winning team would get supper and a dance, while the losing team would provide the meal and entertainment. In the end, they called it a tie, and everyone celebrated. The fort was used to protect the settler’s livestock, and when Blackhawk and his warriors arrived the settlers were able to negotiate peace. Today, there is a historic marker in front of the old fort. It is the only adobe fort remaining of the many that were built by Mormon pioneers in Utah. 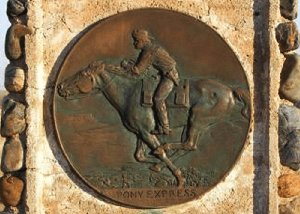 The Pony Express is one of the more well-known features of the American West. It did not last long (April 1860-October 1861) before it was replaced by the telegraph, but its fame lives on today. Pony Express riders were generally young men, aged between 16 and 19 years old. The riders had to face many perils, including bandits, potentially hostile Indians, blizzards, and extreme heat, all of which they faced alone. The stations along the route provided fresh horses and supplies for the men, so they could continue on without resting. The Pony Express passed through part of White Pine County, and an interpretive site across the highway from the historic Schellbourne Station provides a chance to learn about and stand on the old Pony Express Trail. 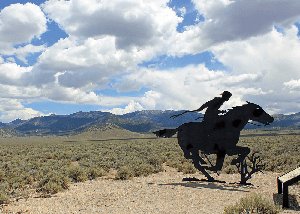 First established as a Shoshone Indian Village site, Schellbourne Station has seen many changes over the years. in 1859 it was used as an Overland Stage and Mail station, and in 1860 it was used as part of the Pony Express. When the Pony Express was replaced by the telegraph in 1863, Schellbourne Station became part of the telegraph route. Over the years, the station has been used by miners and ranchers. Today, it is preserved as a ghost town on a private ranch, with an interpretive site located across the highway.

Learn more about the ghost town of Schellbourne and the history of the Pony Express in Nevada.

Back to Things to Do